In 1990, the 1977 programming language and interpreter CHIP-8 had its renaissance on the HP 48S, a graphing calculator that was common in engineering schools. The numeric keypad was well suited for CHIP-8 input, and the simple language made it easier to make small games to play in the classroom.

I recently purchased an HP 48GX to play CHIP-8 games on. The user manual is pretty hefty, so I thought I’d write a short guide on how to use CHIP-8 on a HP 48 calculator with no frills or maths.

What calculator to get

If you don’t already have a calculator, here are your choices and their differences (at least the ones relevant to us).

I recommend an HP 48G+ or HP 48GX, for the faster CPU and additional memory. If you find one that comes with a cable, that’s nice, as you’ll need one (but you can buy one separately or even jury-rig one).

One thing you could look for is that some later 48G/GX/G+ models came with a better LCD screen with better contrast. You can tell by the color: Black pixels on gray background, as opposed to the usual blue pixels on green background. Here’s an hpmuseum.org forum thread with comparison pictures.

In the rest of this article, model-specific instructions will be denoted like this:

Information for HP 48S and HP 48SX will be orange.

To play CHIP-8 games on your calculator, you’ll need an interpreter.

The TLDR summary on what to get is that you go to Chromatophore’s repository and download these files:

Now for the historical background on these interpreters, which you can skip:

Not long after (1991), SUPER-CHIP was released, which expanded CHIP-48 with some new capabilities (like four times the screen resolution). This is the one you want. It comes in two versions: SCHIP for HP 48S/SX, and GCHIP for HP 48G/GX/G+.

However, both CHIP-48 (c48) and SUPER-CHIP (SCHIP/GCHIP) are subtly incompatible with many CHIP-8 games written for other platforms. They’re not completely backwards compatible and can’t run all games from the 70s and 80s, for example. You can read more about these incompatibilies in Chromatophore’s excellent and detailed write-up. She also patched SCHIP and GCHIP to support these games, and these patched versions are called SCHPC (SUPER-CHIP Compatibility) and GCHPC, respectively. Of course, many actual SUPER-CHIP games won’t run on these… So it’s best to get both flavors.

Here are a couple of websites where you can find CHIP-8 games:

There are many other CHIP-8 games on the Internet, dating all the way back to 1977 (and mostly only compatible with SCHPC/GCHPC), but these ones should keep you occupied for a while.

Now you need to be able to transfer these files onto the HP 48. To do that, you need a special HP to serial cable. You can get a first party one online, but they’re not exactly cheap.

The second option is to make one yourself. This requires some soldering. I haven’t done this myself, as I got a cable with my calculator, but you can follow this How to Make a Serial Cable guide.

Unless you have a serial port on your computer (which you probably don’t), you’ll also need a serial to USB connector. They should be fairly easy to find. Here’s a pretty cheap one on Amazon.

Now hook up your calculator, and set it up to receive files. 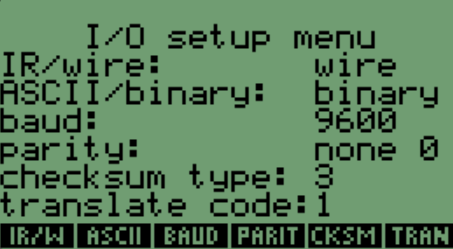 When you're done, press I/O (↰PRG) again, and it'll go back to the main screen with the I/O menu open at the bottom.. 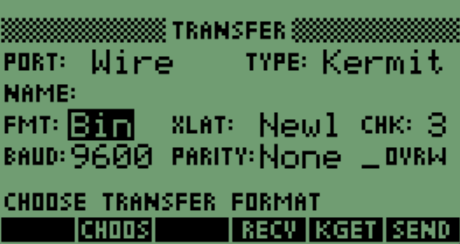 Now that the calculator is ready to receive, you can transfer files to it via the Kermit protocol. There are several programs online you can use.

For Mac and Linux, if you’re familiar with the command line, C-Kermit is probably the best bet. Use the following commands:

For Windows, I ended up just getting the good old HyperTerminal. That program used to come with Windows all the way until Windows XP. It’s not included anymore, but you can find it online and run it fine on Windows 10 (it’s just an EXE and a DLL). Set up with the corresponding settings as on the calculator.

My cable appeared as serial port COM3 on my computer, but yours might differ.

Now everything should be ready to transfer the file.

Then send the file from the computer (with C-Kermit, type the command SEND followed by the filename). Boom! The file should appear on your calculator.

On HP 48G/GX/G+, you can also transfer files using the XMODEM protocol instead of Kermit. XMODEM is much faster than Kermit, but it doesn’t transfer the file name, so you will need to enter a file name on your calculator to receive it. (Kermit also supports ASCII files, while XMODEM only supports binary, but CHIP-8 games are binary anyway.)

On the home screen, you should see a list of all your files at the bottom, in small black boxes. These are the global variables on your HP 48, and each file is stored in a variable. If you don’t see them, you can get them back by pressing VAR. If you have more variables than can fit on the screen, press NXT and PREV (↰NXT) to page through them.

To run a CHIP-8 game, first press the white top-row button (A–F) corresponding to the game you want to run. This will push that variable onto the stack, and it should appear at level 1. (The string that’s displayed on the screen might contain the name of the game, or it might just look like gibberish; this is normal, as it’s just displaying the contents of the binary file.)

Then, press the white button corresponding to the CHIP-8 interpreter (labelled SCHIP/GCHIP or SCHPC/GCHPC). This will run the interpreter, using the game at the top of the stack as its argument!

As you can see, the HP 48 is a stack-based calculator. You don’t need to think about that too much, but if you push the wrong thing to the stack, press ⇦ to drop the last object from the stack.

The HP 48 doesn’t have a hexidecimal keypad, so the 16 keys in the bottom right corner are used. This means that some games made for other platforms might prompt you to press a key that either doesn’t exist on the HP 48, or is located somewhere else. This is especially confusing for the number keys, which have moved around. In that case, you can refer to these images:

In addition, the following keys have special behavior:

First, press the ' key to enter text input mode. Then, press the button underneath the game you want to delete. The file name should appear in single quotes. Press ENTER to push the name onto the stack.

Now, wouldn’t it be fun to make your own CHIP-8 games for your calculator?

Octo is an integrated high-level assembler, IDE and emulator that is easy to use. It also comes with several guides on how to write CHIP-8 games, and it can assemble the code into a binary file that you can load onto your HP 48.

Every year, in October, the Octojam game jam takes place, where enthusiasts get together to make CHIP-8 games. Join us!

A map I made for the interactive fiction game Anchorhead.